Brazilian funk is resonating louder. But while the world associates the hypnotic beats from Rio’s outskirts with a rather contemporary scene, represented by artists like Rennan da Penha, Heavy Baile, and the internationally famous Anitta, the term “Brazilian funk” was certainly not born these days.

The Brazilian soul-funk roots date back to the early 1970s, when Motown and Atlantic Records struck the hearts and minds of a cosmopolitan black youth from Rio’s outskirts. Galvanized by black artists, DJs, and producers who went crazy with James Brown, Sly and the Family Stone, and Marvin Gaye—to mention a few—the Brazilian soul-funk dove deep into the essence of black America’s music culture. Among the several artists who arose with the Brazilian soul-funk, a few stood out for bridging that new musical groove with explosive political messages—sometimes without even realizing it. And no one did it so well like Gerson King Combo.

A black dancer and choreographer who turned into a singer and composer, Combo marked the history of Brazil’s black music in many ways. Owner of James-Brown-like moves, he set fire on the stages of “Black Rio,” a movement that promoted the black music culture in Rio de Janeiro, in which he actively participated. Known as the “King of the Brazilian Soul,” he also foreshadowed the rap aesthetics when Brazilian hip-hop didn’t even exist. 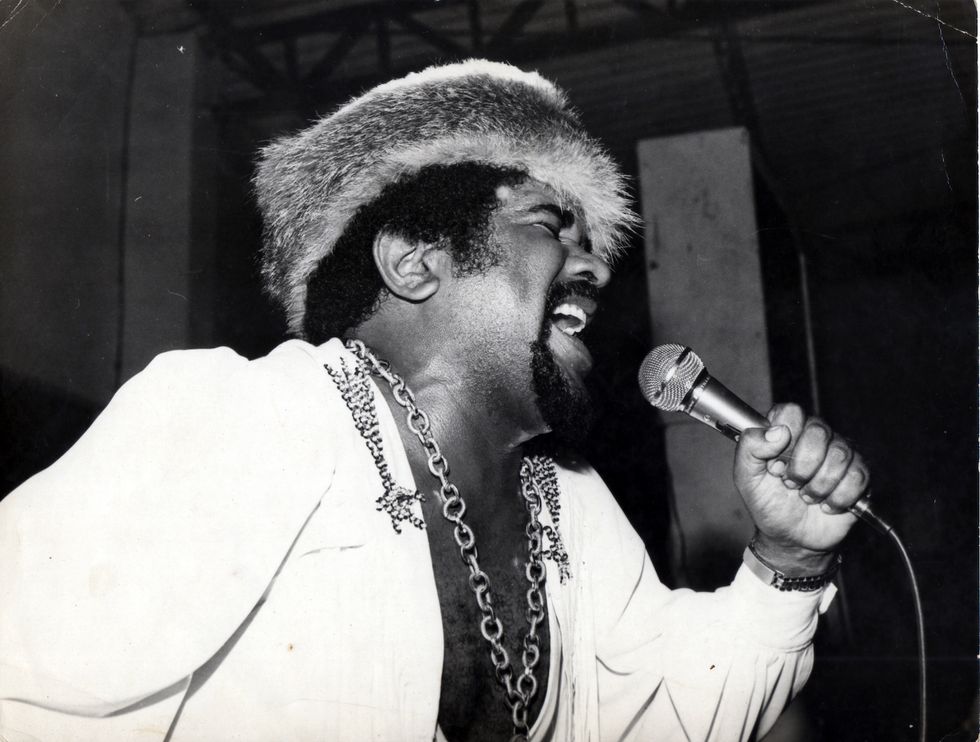 On September 22nd, the “Brazilian James Brown” died at 76. More than a rap visionary and unprecedented funk dancer, Combo will be specially recalled for the burning political flame of his music—which inspired fans with messages of black pride, racial justice, union, and peace.

Although Combo is pretty much synonymous with funk and soul music, his artistic career kicked off in the rock ‘n’ roll universe. In the mid-1960s, American rock was booming among Rio’s youngsters. Combo didn’t hesitate to surf this wave: “Dancing and singing was everything he wanted,” affirmed Combo’s brother, the composer Getúlio Côrtes. Combo’s dancing talent gradually earned him more visibility in the entertainment industry. By the late 1960s, with the help of Côrtes, Combo choreographed in the biggest TV shows of that moment.

Along with names of Combo, Carlos Dafé, Cassiano, Tim Maia, Tony Tornado, and Banda Black Rio, the artist Hyldon is one of the bastions of the Brazilian soul. He recalls Combo’s first TV appearances: “He used to win every dance contest. He was a joyful, unforgettable figure.” So positive was Hyldon’s first impression of Combo that, from the 1970s on, they partnered on several music projects. They last worked together in 2019, when Combo did the vocals for Hyldon’s “50 Tons de Preto” (“Fifty Shades of Black”)—a song inspired by his personal experiences on racism.

“He had this Barry White vibe [and liked] to improvise something before the song started. Combo was like a vocal cheerleader. If the song didn’t have Gerson’s touch, it wouldn’t be as cheerful,” remembered Hyldon, a former soul music producer who used to invite Combo to participate in every single black music album.

Because Combo was a choreographer involved with the rock scene, it’s not suprising that rock music influenced his first recordings. “His debut as a singer was strongly marked by the aesthetics of the Jovem Guarda music,” explains Combo’s last manager, Ronaldo Pereira, referring to the Brazilian musical movement inspired by young rock icons from the US and UK, like The Beatles. Having worked with Combo since 2009, Pereira also believes that Combo’s brother Getúlio, “who was more of a rock composer, was also a big reference in his early productions.” Getúlio, indeed, composed one of the most famous Jovem Guarda songs: “Negro Gato” (Black Cat), a 1966 anthem for the rock-fan youth.

The “conversion” of Gerson Côrtes to the “King of Soul” Gerson King Combo (an allusion to the American band King Curtis Combo) happened somewhere in the late 1960s and early 1970s. As Gerson affirmed to a Brazilian TV show a few weeks before he died, he was in the United States, working as a crooner for the singer Wilson Simonal, when he first heard Martin Luther King‘s “I Have a Dream” speech—which, in Combo’s words, felt “like a punch.” While King’s words inspired Simonal to release the powerful “Tributo a Martin Luther King” in 1967, the minister’s non-violence philosophy was, ten years later, incorporated into the most iconic song that Combo has ever created: “Mandamentos Black” (“Black Commandments”).

Talking directly to the Brazilian black youth, the album Gerson King Combo (1977) is considered one of the “bibles” of Brazilian soul music. Singing about black pride, self-love, and freedom in tracks like the above-mentioned “Mandamentos Black,” but also “Hereditariedade” (“Heredity”), and “Esse é o Nosso Black Brother” (“This is Our Black Brother”) Combo “managed to get heard by this audience, who was in ecstasy with American black music. In a very ludic way, he brought up an empowering and positive speech for this audience,” affirmed Luiz Felipe Gaoners, journalist and co-author of 1976 – O Movimento Black Rio, a book on the movement that celebrated the black music culture with parties in Rio de Janeiro. 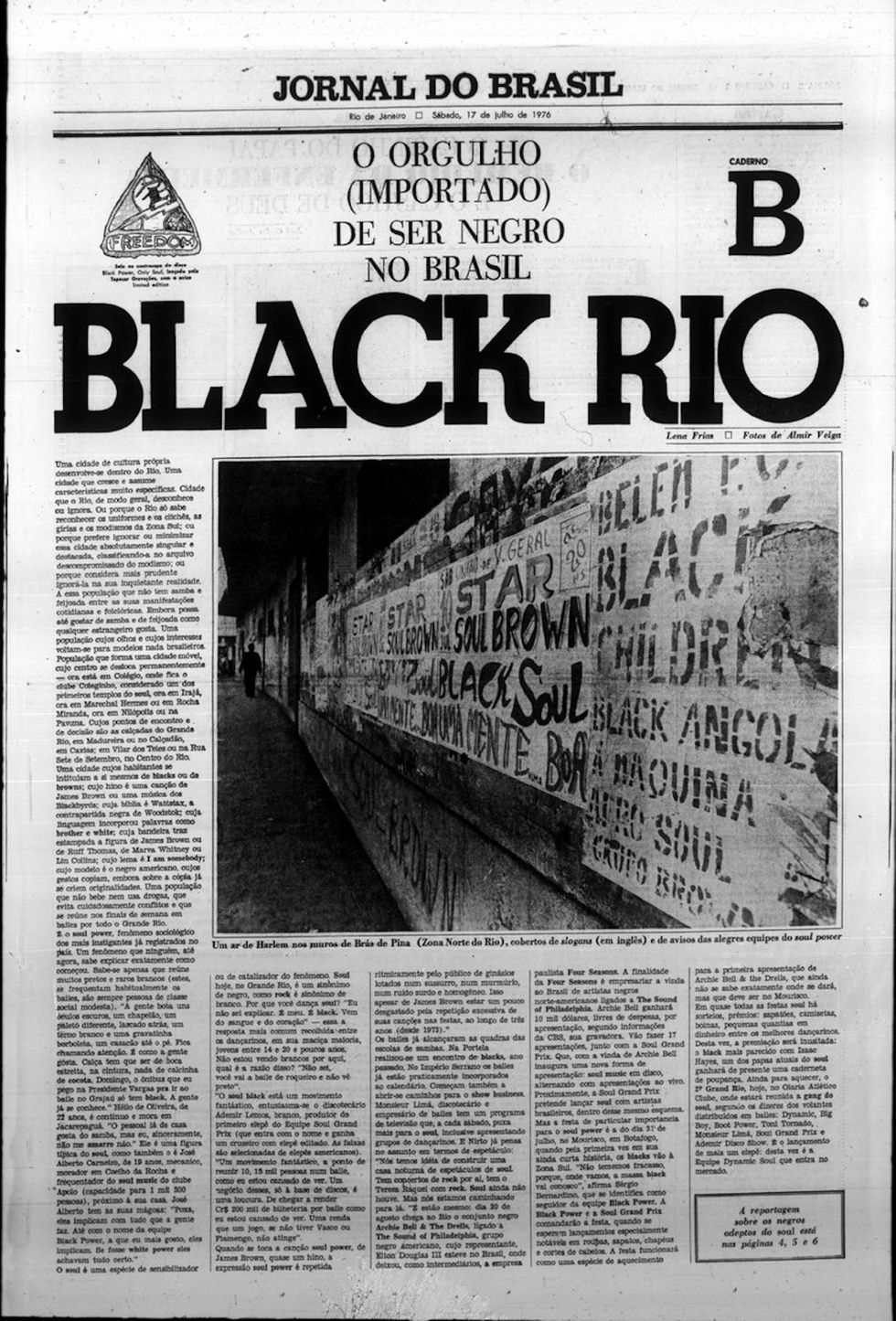 When the newspapers introduced Black Rio to a broader audience in 1976. Story by journalist Lena Frias.

Though little-heard-of, Black Rio was an impressive cultural phenomenon that started in Rio, but rapidly spread to São Paulo and Salvador. What began as small and amateur gatherings soon turned into massive black music parties, marked by ostensive sound systems and diversified audiences of up to 30,000 people. As Brazil’s contemporary black music owes extensively to Black Rio, the fundamental contribution of Combo to this movement also deserves attention.

More than a regular performer at Black Rio events, Combo brought Portuguese-language songs to a scene dominated by English lyrics. Hyldon recalls: “The Black Rio balls only played the American songs, but no one understood it. So we started to compose soul music in Portuguese,” By singing the black pride in his native language, Combo also helped raise awareness on race issues among the (predominantly black) audience of Black Rio.

But a repressive military regime ruled Brazil during Black Rio’s most shining years. As a movement openly standing for black pride, Black Rio was watched closely by Brazil’s surveillance organs. Even though peace and respect predominated in Black Rio’s events, the regime classified the movement as dangerous: it could ignite a racial revolution in the country at any time. Because it was concerned with a broader notion of ‘black identity’ (one connecting diverse black experiences across the globe), Black Rio was also suspicious of being a Black Panther cell in Brazil. Its main leader? None other than King Combo, according to supporters of the regime.

Despite the black pride message of his lyrics, Gerson couldn’t be less engaged with conventional political activism: “I didn’t even know what was right-wing and left-wing. All I wanted to do was music,” he affirmed in his last interview. The Brazilian left-wing, by the way, considered Brazilian soul music “alienated.” According to left-wingers, Black Rio was leaving Brazil’s authentic music culture aside in the name of “imperialist America’s music.” 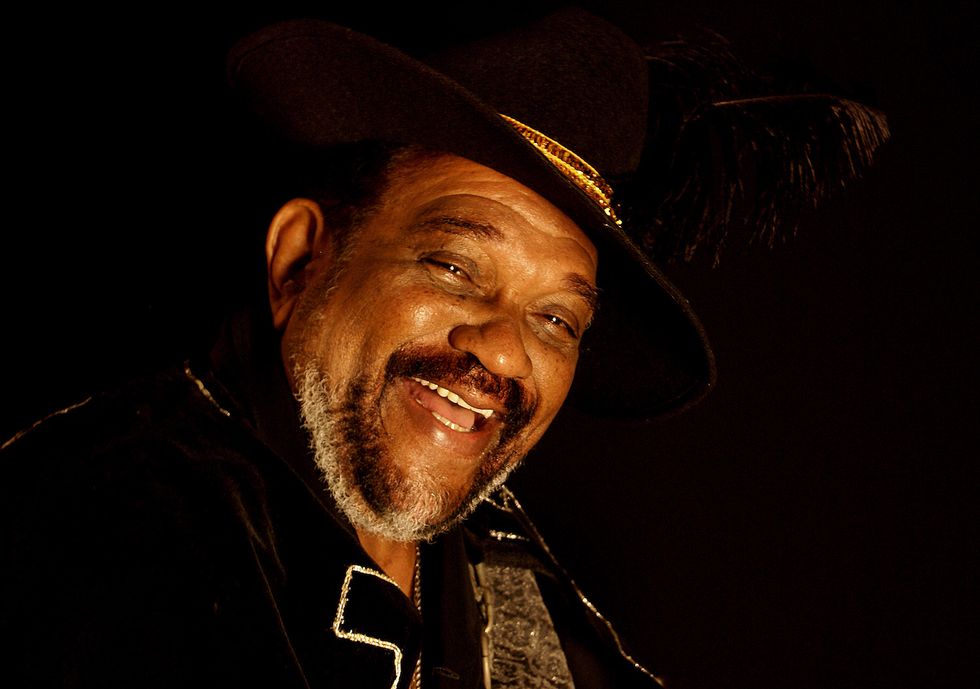 Black Rio didn’t stay silent. One of the most resonating answers came in 1976 from Dom Filó, a music producer and manager of Soul Grand Prix, one of Black Rio’s biggest sound system teams: “Why is it so naturally accepted that the affluent youth wear jeans, dance to rock music, and revere Mick Jagger, while the black youth from the outskirts cannot wear colorfully, dance to soul music and revere James Brown? Why does the black person have to be the stronghold of Brazil’s music purity?,” he told the Brazilian magazine Veja in November that year.

Hyldon agrees with Dom Filó’s 1976 statement: “If you think this way, Bossa Nova should also be revisited—it is inspired by jazz music, which is from the United States.” In “Jingle Black” (1977), Combo also reacts, sarcastically referring to samba musicians who criticized Black Rio (like the composer Candeia) as the “Robin Hood of Samba.”

Like Combo, most Black Rio characters didn’t engage with conventional political activism, nor did they want to. But this doesn’t mean Black Rio didn’t connect with political activism in creative ways. As Luciana Xavier, author of A Cena Musical da Black Rio (The Musical Scene of Black Rio), puts it, the race consciousness strategies of Black Rio manifested through leisure and entertainment—the promotion of beauty contests that celebrated the Afro-Brazilian features, for example. These were strategies that went beyond conventional political-pedagogical participation. 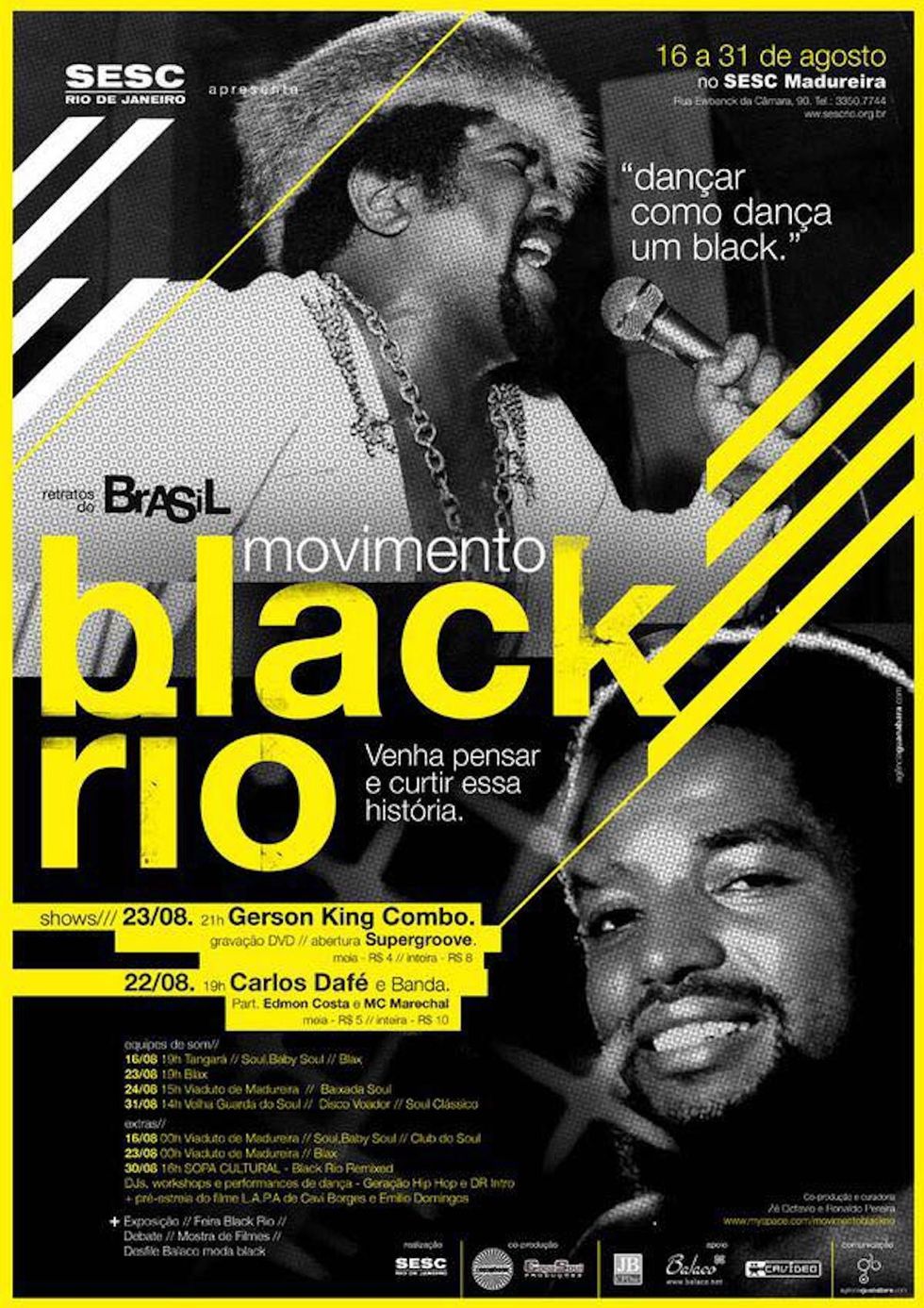 Art for the 40th anniversary of Black Rio, a visual arts exhibition organized in 2010.

Coupled with systematic police repression from dictatorship times, the growing influence of pop-rock and disco music in Brazil led to the decline of Black Rio and soul music in the late 1970s. After twenty years away from the business, Combo returned to the stages in 2005. In February 2020, he launched “Deixe Sair o Suor,” the music video for a Portuguese-language version of Rufus Thomas “Breakdown.” But Combo’s last (and unfinished) project was also one of the most daring from his career: a song on the murder of George Floyd.

A straightforward anti-racist manifest, “Tira Esse Joelho Daí” is Combo’s first composition in partnership with his brother Getúlio. “This is a song about all the knees that suffocate us: unemployment, racism… We wanted to go deeper in the #BlackLivesMatter message and put a finger in the wound,” he explained, anticipating his favorite part of the lyrics: “I use my knee to pray, you use yours to kill.”

Combo’s death came as a shock to Brazil’s hip-hop community. He will be missed, believes Pereira, because Combo invented rap music in Brazil. “In songs like ‘Melô do Mão Branca‘ (1980) and ‘Funk Brother Soul‘ (1978), he rapped without having any previous reference from American rap music. It was intuitive,” affirms Combo’s last manager, who will miss the charisma of his former client and friend.

For Gaoners, Combo’s uniqueness will forever reside in his thunder voice, proud lyrics, and dressing style. “He looked like the superhero of Brazil’s black music. Honestly, there are not many places in the world where you see a black music personality wearing a flying cover and singing ‘Own your mind, brother!’“