“When we started, record labels had one producer for the whole record label. Meaning that Mannie Fresh produced every song on every album, from the intro to the artist.”

Some labels, groups and collectives still observe that tradition. It, however, takes a producer with such versatility they could be mistaken to be different personalities altogether.

Joburg-based producer 808x is a great example of that type of producer. Being the in-house producer and engineer for one of the country’s most versatile collectives and contemporary hip-hop labels, Innanetwav, 808x has to craft beats that slice through the spectrum of genres with inimitable fluidity and creativity.

The sound engineering graduate combines vintage genres cushioned by vinyl hisses for popsnotthefather’s ethereal croonings, whips out his trademark pulverising basslines for The Big Hash, Solve The Problem, Nicole Nyaba and Southside Mohammed‘s diverse rapping styles and mellows everything down when The Big Hash artist takes on his R&B singer form.

The collective’s individual catalogues and 808x’s singles and his 2019 release Station 2097 all tell his story and showcase his abilities as a beatmaker, producer, engineer and artist.

808x, who in the crew’s early years, stayed out of the spotlight, is beginning to show more of himself to the world. 808x is outspoken and, just like his Innanetwav acolytes, believes in maintaining professionalism while being “organic” from how he creates music, chooses friends, and deals with brands.

Apart from the Innanetwav roster, 808x has worked with the likes of Kwesta, A-Reece, Ginger Trill, DJ Sliqe and several others. In the interview below, the producer takes us through his working process, relationships with some members of the Innanetwav, approaching collaborations and more.

This interview has been edited for length and clarity.

What do you use to make beats?

FruityLoops and Pro Tools. It depends on what I’m trying to do; there are certain sounds I can’t find in FruityLoops, but they are defaults in Pro Tools. So I can go to Pro Tools, record the keys, export them, and then import them into FL.

What instruments can you play?

I play everything. I play nine instruments. Piano, harmonica, guitar, bass guitar, which is the same thing, recorder, electric guitar. What did I leave out?

You did music in school?

Yeah. When other kids were doing arts and culture and shit, I was playing music.

It was me, and Oshoku, and Ty.

Oshoku puts out a lot of dope flips. Is he just a producer?

Oshoku’s like a myth. He makes artwork. All the artwork, he does. He makes beats with me sometimes, but I haven’t linked up with him in a while, and, yo, he does a lot. Basically, when it comes to buying plugins and all that shit, I don’t do anything. I just give him the money for it, and then I give him my computer. He updates everything. Our computers are cloned and shit. So whatever I have, he has. Except for Photoshop, that shit, it’s not for niggas that make music. 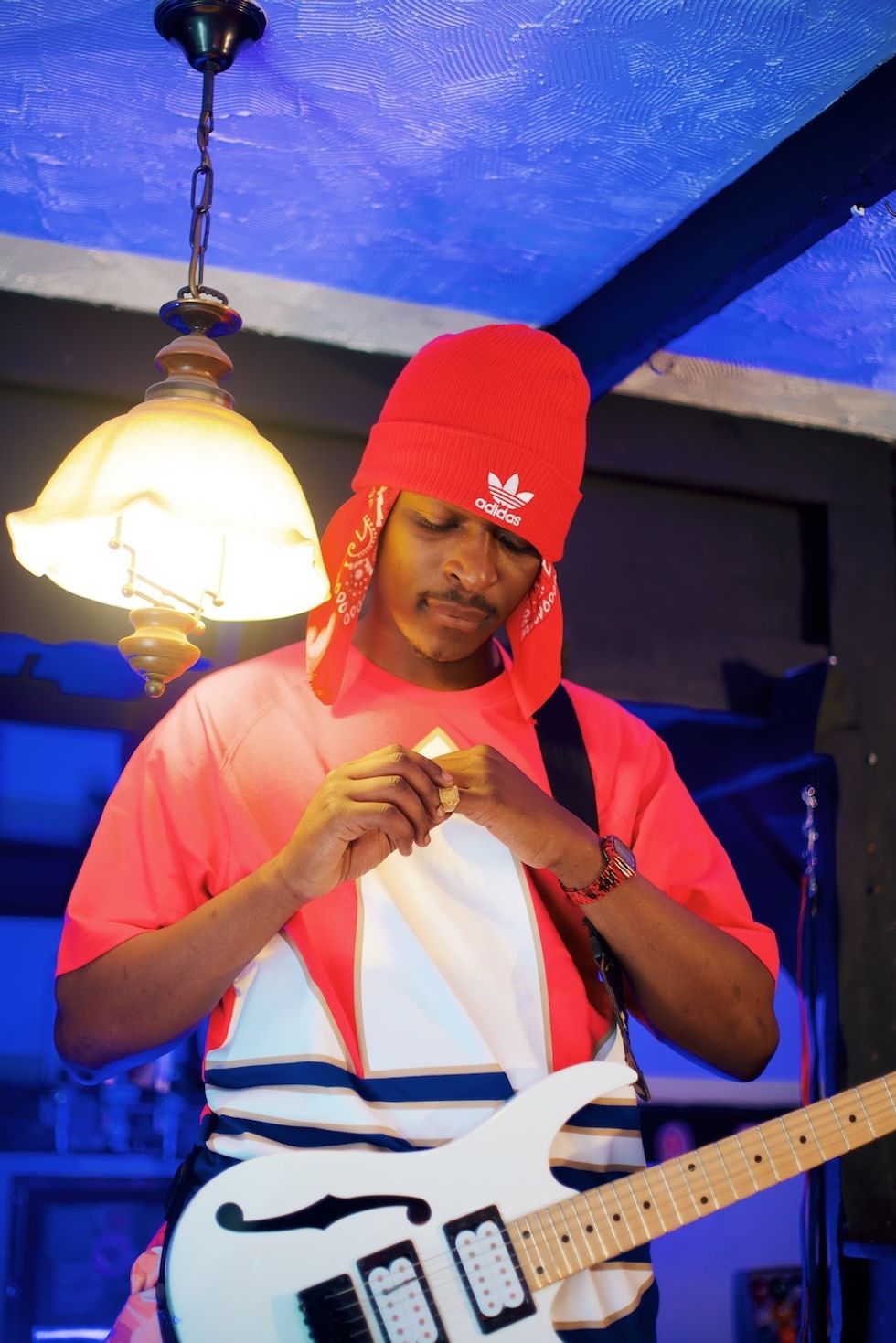 Who came up with the name Innanetwav?

It was me and Oshoku. So me and Oshoku were chilling, making beats and shit. There was no Innanetwav. It was just a bunch of niggas that know each other. No one had the balls to say, “Yo, let’s set a structure to this shit.” And then he was drawing boobs and shit. Yeah. That nigga, Oshoku, was drawing boobs, right? And then he left these two saggy boobs chilling, right? So like, two Us (UU). So it was like W. And then, we just started calling it UU. And then the first project me and Oshoku worked on was called, Microwav, but it’s spelled without the “E” for the “wave”. But, just know that it started as two saggy titties. Grew from two saggy boobies and became somebody. (Laughs)

How did you guys manage to get these brand partnerships so early in your career? It usually takes artists years to get to that.

We got super lit management, so when they tell you how to do shit, you just have to listen, and do it, and it will work. So they’ll tell you, “Yo, you trying to get a deal? Okay, do this, this, this, but don’t do that, that and that.” They’ll know exactly who to hit up and say, “Look at this guy, and tell me what should be done. How can we work this out?” All that behind-the-scenes shit.

And then all we do is make it as organic as we can. We get the clothes, rock them at shows, interact with people, just do what we do, and make it look natural. I’ve also done campaigns for other brands before Adidas, so it was easy for me to switch over to Adidas. How I did it, was different; I bought an outfit, then I would just rock it all the time, everywhere, and tagged them.

Recently, the projects that you work on, especially with The Big Hash, are attributed to “The Big Hash and 808x”. What’s that about?

I’m an artist now. I was just trying to figure my shit out, but I been trying to be an artist the whole time, since probably before Innanetwav started, but I just wanted to do it right.

When you worked with A-Reece on “Built To Win, Born To Lose”, what did you contribute to it apart from the beat?

The beat, mixing, mastering. What else? That’s all there is to it. And direction. I’ll be like, “Yo, structure the song [this way].” Sort of what DJ Khaled does, if he made his own beats. And there’s a lot of songs that I sing on that you won’t realise that I’m the one singing.

How did you meet A-Reece?

I met Reece in 2018, or late 2017. The day he was shaying that cipher on MTV with the half denim jacket, where he killed everyone. I was there with Hash. That’s where I met Reece and Mash, and then we made “Outcast” in 2018.

When we get in studio, we don’t rush to make music. Most niggas always want to, “Yo! Let’s start…” You’ve got to chill and vibe out, and then still work. You can’t chill too long. You’ve got to get to work, but at the same time, you can’t force the energy. There’s times where you don’t have to make a song, you just have to chill.

Do you ever send you beats out to artists?

Nah. That’s the best way to sleep on fire. If I’m not in the studio with you, then hade, boy. The only time I send beats is, let’s say we leave here [the studio] after we make a song, and you need the beats to finish writing, then I’m going to send it.

I understand how artists think. If I’m chilling at home, and I get a rapper sending me a beat. I’m not going to get excited to play that beat. I’m probably not even going to play it.

Or there won’t be any chemistry. Now, you can’t perform the song because there’s blurred lines. That’s why energy matters. If I make a song with you, I’ve got to be able to represent the song everywhere I go. I shouldn’t have mixed emotions about it. 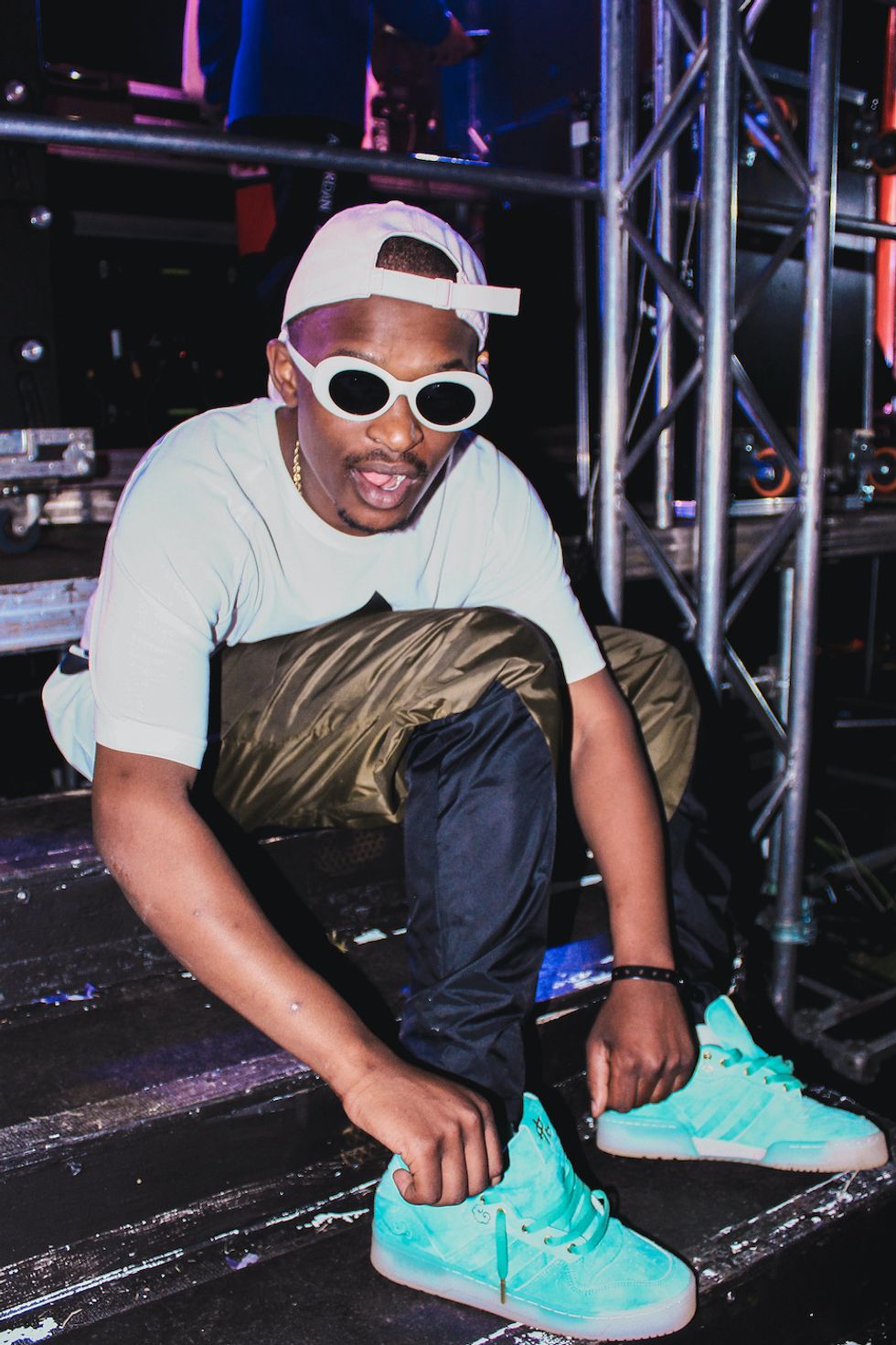 Describing what he does, 808x says, “Sort of what DJ Khaled does, if he made his own beats.”Image supplied.

Your production style is as deserve as the artists you work with (mostly the Innanetwav roster). When you are making a beat, do you always have the artist in mind or they pick from what you create?

Every time I make a beat, this shit is for me! For real. Only when the artist comes through and feels it, and I can never see what they’re trying to do, then it’s theirs. I just make the beats, I let it go. I only understand what the beat is capable of after someone is like, “Yo. I got something for this.” Then I’ll be like, “Oh, shit, that’s a dope idea.” Because, trust me, when you sit down and say, “Today I’m making AKA type beat,” that shit is going to be trash. I can bet my last rand on that shit, it’s going to be trash.

Do you ever work on a beat with another producer?

Yeah. I have, but I don’t like doing that because I feel like I don’t need that. Not to be arrogant or anything. It doesn’t make sense to me because of the way I learned how to make beats.

Then how do you approach features?

For me, you have to be in the studio together. Unless you’re really far away, like from Nigeria or something.