Jackline Acheampong is a Ghanaian singer, songwriter, and performer who goes by the name of Gyakie.

Gyakie is a budding musician who also happens to be the daughter of Ghanaian highlife legend Ernest ‘Owoahene’ Nana Acheampong, popularly known as Nana Acheampong, one-half of the famous Lumba Brothers. Her familial connection to a Ghanaian great had a strong influence on her love for music from a young age, and on her becoming the fledgling musician she is today, but there’s more to the story.

In August 2020, Gyakie dropped her debut project, a 5-track EP simply titled Seed. The cover artwork of the EP is a photo that shows her as a child, wearing studio headphones and posing in the recording booth alongside her father—a visual which could easily be taken as a bold index finger pointing right at the family business. Although that assertion might be correct, she’s not exactly here to carry on the family legacy Gyakie aims to chart her own course, maintaining her own identity as an individual and a musician, while expressing herself in the art form she loves most. 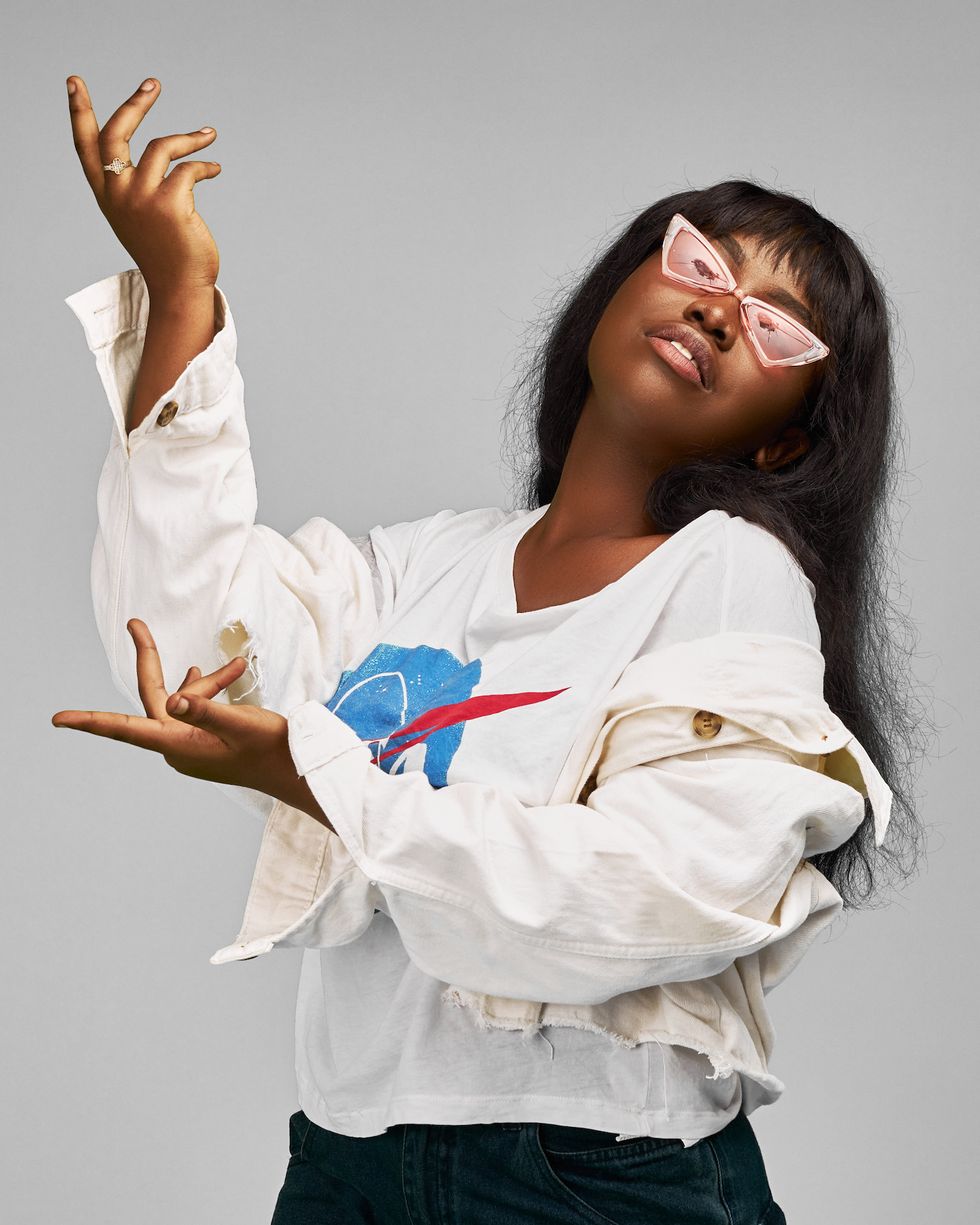 Photo: B. Grey courtesy of Gyakie.

According to the afro-fusion singer, the Seed EP is a journey that explores diverse genres as a reflection of her musical quest of finding and staying true to herself, while leaving lingering thoughts of what to expect from her in subsequent projects. Seed is short but sweet, and does just that. The EP is full of different sounds that give you just a taste of what she is capable of and what to expect on her journey, which has only just begun.

Gyakie spoke to us at OkayAfrica about her EP, how she started making music, and whether she feels any pressure to match up to the achievements of her dad. Check out the interview below.

So who is Gyakie?

Gyakie is a Ghanaian afro-fusion artiste under the management of FlipTheMusic. She’s currently a student at Kwame Nkrumah University of Science and Technology studying international business.

What made you decide to become a recording artist?

I did not make an actual decision to start doing music. It’s something that just happened. Even though growing up music was all around me, I mean my dad is a musician who influenced highlife greatly. As a result of that, music was literally all I could hear and my love for it was very much insatiable. I wanted to be a career woman in an office working internationally, hence me pursuing International Business but at a point music kept on calling one way or the other. I can’t tell what exactly it was but something kept pushing me to just go to the studio to record something that kept playing in my head.

I met this Nigerian producer called Sosa on KNUST campus. He played me a couple of beats and with how interested I was in music and entertainment, I fell in love with this particular beat swiftly. I poured out what kept ringing in my head into the microphone and that’s where the entire journey began.

When did you figure out that this is the career path you’d want to take in life?

I figured out this was going to be my career path after I released my debut song, “Love Is Pretty” and experienced an amazing reception. “Love Is Pretty” is a reggae love song which was released in February 2019. With it being my debut song, I did not expect the numbers I gained after the drop. The feedback from the listeners pushed me to continue recording music.

Do you feel any pressure to fill your father’s shoes in regards to his achievements in music?

There’s no pressure! My dad is legendary, he did his and I’m here to do mine as well.

Does his music have any influence on your own sound?

Yes it has. In the sense that, growing up, I listened to his songs often. His music has influence in my sound. I do afro-fusion and although I have not released any highlife track just yet, I believe I’m capable of doing it and doing it well because I grew up into it. Through my dad, I listened to a lot of legendary talents in Ghana’s history.

Tell us about the Seed EP.

The Seed EP, which happens to be my debut EP, is a versatile project with five songs. It’s an introduction to myself and my sound. Again, it takes the listener on a journey through my experiences in life and music

What’s your favorite song on the Seed EP?

My favorite song on the EP is “Vacation.” “Vacation” is a song that gives you good feels. The lyrical content of the song makes me fall for the tune the more.

Was the reception of your debut EP what you expected it to be?

The reception exceeded my expectations. There was a build up to the release which heightened the anticipation for it, and I believe it was beyond what they expected hence the 300,000 thousand plays in a week makes it evident.

What can we look forward to seeing next from Gyakie?

My management and I are working very hard! There’s a lot in store for the fans. Look forward to mind blowing things.